Listen to Our New Product
TOP 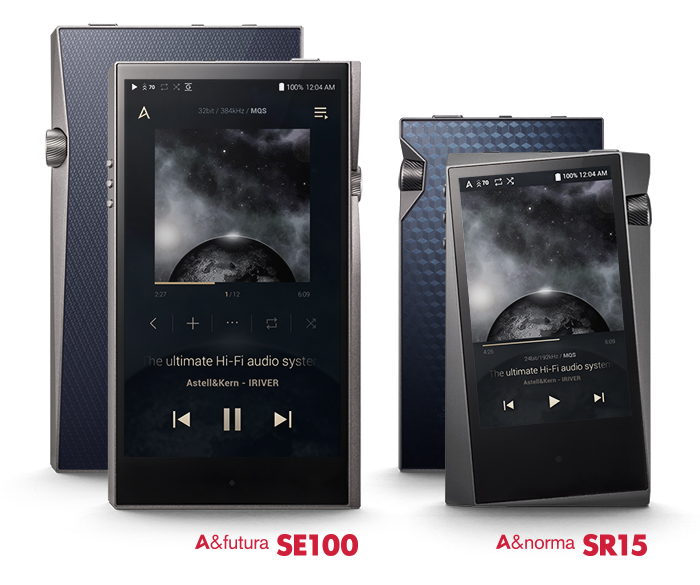 IRIVER (www.astellnkern.com) launches its two new Astell&Kern player lines at the High End 2018 Show in Munich, Germany on May 10, 2018.

The first player in the A&ultima line, the SP1000 was launched at High End 2017 Munich.

The A&futura SE100 is equipped with a professional grade DAC chip from ESS, the SABRE ES9038Pro, which offers 8-channel procession of sound inputs.

With 4-channels of dedicated processing per left and right channel, the SE100 is capable of producing even more detailed and clear sound with excellent SNR.

The SE100 can play back up to 32 bit/384kHz PCM audio and can play Quad DSD natively. Thanks to an updated amplifier design and noise control technologies implemented by Astell&Kern, the SE100 produces 4.1 Vrms (balanced output) from its built-in amp only. The SE100 also features an Octa-core CPU, 5-inch touch screen, 128GB internal storage, support for fast charging, and can play back music for about 11 hours.

Its aluminum alloy body design is solid and durable, and the classical design of the volume knob and diamond-patterned glass back plate completes the premium look and feel of the player when holding it in your hand.

The SR15 is the first model from Astell&Kern’s new standard line of players.  The A&norma line is designed to provide those new to high resolution audio a feature-packed introduction to the Astell&Kern brand.

‘Pragmatic’ Hi-Fi is now available with A&norma. The A&norma SR15 is packed with several features found in previous Astell&Kern flagship devices so that even beginners can enjoy the fullest musical details when listening with an A&norma player. The SR15 uses the proven Master HIFI level DAC chip, the Cirrus Logic CS43198, and features a Quad-core CPU which provides abundant power to process high-res music and creates an intuitive and snappy user experience.

The A&norma SR15 can playback up to 24bit/192kHz PCM audio, and single-rated DSD natively. All of these features are packaged in a solid aluminum alloy body that resembles the popular AK70 series. The user interface is also very intuitive and is based on other upper-tier models in the Astell&Kern line.

In addition to the two new players, Astell&Kern will also showcase its latest high-end IEM collaboration with JH audio, the Billie Jean, which was announced at the 2018 Fujiya AVIC Spring Headphone Festival in Tokyo, Japan on April 28, 2018. Billie Jean is the latest Siren series In-Ear-Monitor(IEM) from the collaboration between Astell&Kern with Jerry Harvey Audio.

Billie Jean combines the patented technologies from Jerry Harvey Audio with the world-best quality production of Astell&Kern to produce another new IEM with great sound and quality build.

The new Acoustic Chamber Sound Bore design has been carefully designed to bring a wide soundstage through incomparable dynamic range, without adding any artifacts in the sound production.